Having been alive for a number of years, viewing the world from deep within my secret bunker, I have come to the conclusion that all of its problems are down to the human inability to speedily evolve past Fear. If only we could concentrate really hard, dose ourselves with superpower unlocking radiation or a really weird insect bite, and get our brains past the idea that different is scary (so, so bad…RUN!) we might be able to get this ‘living together on the same planet’ thing right. I say ‘we’ because I am just as bad at this as everyone else, although I am at least trying to get over myself.

It is easy to imagine this as an insurmountable problem, surely it’s just part of being human to fear new and possibly dangerous things, but that’s the crux of it, new and dangerous things…not people. It’s easy to overlook the difference between strange situations (is that really a stick? It’s making a hissing sound, that’s not a stick) and meeting strange people (yes, people can sometimes be strange, but in this case I mean strange as in new). It is human to be wary of sticks that hiss, it is NOT human to discriminate, hate, subject to abuse, maim, kill, reduce to poverty and constantly belittle other human beings…those are learned behaviours.

The people who teach us those behaviours, sometimes unconsciously, sometimes not, do so because they are afraid. When a politician tells us that immigration will destroy the economy and the safety of our homes they are not only lying (immigration boosts economies and recent immigrants are less likely to commit crimes) but they are also deliberately trying to instil fear in you. Fearful people want quick and easy solutions to their worries. Immigrants cause crime? Ban them, beat them…bomb them. Never, never ever, during those speeches about being tough on scared and desperate people, the ones who really do have things to be scared and desperate about, will you hear those politicians talk about how human beings are social creatures that are supposed to look after each other. Those politicians are afraid that should the population begin thinking for themselves they will lose their power and their gateways into obscene wealth and privilege. Keeping you in constant fear stops you from questioning their lies.

But the lies don’t always come from afar and the people telling them don’t always know they’re lying. Fear is used to keep children safe, often from dangers that don’t exist. They grow up shielded from new experiences or only receiving the problematic Disney versions of them and then they find their adult lives narrowed and caged in. How do you seek out the new and obviously desirable lifestyles you envy on Instagram when you can’t even ask the store owner how to cook okra? (Ok, you can Google that, but what else are you missing out on by not having that conversation?)

So next time you spot someone, either on the telly or in your living room, saying something negative, bigoted or cruel, pause to consider what they must be afraid of in order to hold that opinion. Does great Uncle George really think a battered and defeated Syrian woman is going to collapse the economy, or does facing someone who has suffered so badly mean he has to think about his nation’s role in it? Do the violently spewing arseholes of the alt-right really believe in their own superiority, or are so they so terrified of being shown up as below average on a level playing field, that they scream lies about what science says, expecting us to cower because of their volume? Do those with privilege smirk and belittle those without because they have earned the right to, or do their fears command them to imagine themselves deserving of their good fortune (or the good fortune they believe will come to them – for the politicians have told them so) when really they are trapped in fragile bubbles of soap. They do not want to hear what the death of your self-esteem from a million micro-aggressions feels like, for it is hard to explain when you have lived it, so they wrap their arms around themselves and stick their fingers in their ears to prevent their bubbles bursting. But there lies the answer. Burst the bubble, let the real world in. Be afraid for a while and see if it lasts, because if it doesn’t you will learn things you couldn’t possibly have imagined. You will meet people who have strange and interesting tales to tell. You will smile more, not because someone told you to, but because you have things to smile about.

There will also be sticks that hiss. This is where a good old Stoic teaching comes in. Your fears are not based on Reality, but on what you think reality is and by grasping on to the unknown instead of running from it you will eventually chill out about that stuff. That sounds harder said than done I know, but consider this, how many times in the past have you been absolutely terrified of something? You were definitely gonna get fired in that meeting your boss called and after you got fired you would never get another job again because you’re so crap at everything and because you’ll never get another job again you’ll end up on the streets and starving because all of your friends and family will disown you (because you’re so embarrassingly crap, obviously). Was any of that true, did any of it happen? You know what? Maybe some of it did, but the simple fact that you are now reading this article means that you did not die from it. By getting to the age when you can read a rant like this you have survived enough stuff to be getting pretty good at it. You don’t fall over when you put your socks on in the mornings (not too often at least). You are also not too shabby at avoiding buses while crossing the road. If you consciously choose, right here and now, to face the world with your default set at ‘Hmmmm that might be interesting’, rather than ‘ARRRRGHHHH, that isn’t normal!’ would the sky really fall in or might you find new friends, new experiences and less to regret at the end of your days? It’s worth a try in my book.

Just watch out for those sticks. 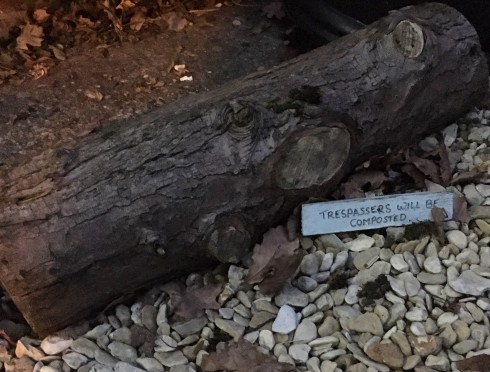